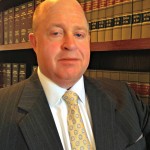 Mr. James is a native Oklahoman born and raised in Cushing, Oklahoma. While in high school, he was active in numerous activities including football, golf, and track. Upon graduation with honors from Cushing High School in 1980, he attended the University of Oklahoma where he played varsity football for the Oklahoma Sooners as an offensive lineman. He received his Bachelor of Arts in Criminal Justice from Central State University in Edmond, Oklahoma, now known as The University of Central Oklahoma. Upon graduation he then received his Juris Doctorate from the Oklahoma City University School of Law.

Upon graduation from the Oklahoma City University School of Law, Mr. James began his law career in Oklahoma City. Mr. James has represented thousands of clients in criminal matters ranging from misdemeanor to felony cases, including murder. Mr. James has developed the reputation within the legal community of handling difficult criminal cases. Mr. James has numerous acquittals of clients charged with murder in the first degree, including those where the death penalty was sought. While Mr. James has maintained an emphasis in the area of criminal defense, his practice has evolved into representation of numerous clients, including corporations, cities and towns, in many diverse areas of law.

In 1996 Mr. James secured the acquittal of Larry Tannehill in the high profile murder trial surrounding the death of Ryan Luke. As a result of Mr. Tannehill’s acquittal, Mr James received the 1996 Presidential Award from the Oklahoma Criminal Defense Lawyers Association for Outstanding Criminal Defense Advocacy

In 1999 Mr. James was selected by the Oklahoma Indigent Defense System to represent Timothy McVeigh as a result of the prosecution by the State of Oklahoma of Mr. McVeigh for the bombing of the Alfred P. Murrah Federal Building in Oklahoma City.

Mr. James success in the legal field has led him to be retained by numerous police agencies and organizations in the defense of civil rights lawsuits. Further, Mr James has served as General Counsel to the Oklahoma State Troopers Association, the Oklahoma ABLE Agents Association, and the Oklahoma Game Warden Association

Mr. James is still active in his association and support of college football and athletics at the University of Oklahoma. His other activities include serving on the Board of Directors of the Jim Thorpe Association;the Selection Committee of the Jim Thorpe Award for the Oustanding Defensive Back in College Football;the Honors Committee of the Oklahoma Sports Hall of Fame and numerous other Committees that support and promote Oklahoma sports history and heritage.

Mr. James has been peer review rated by members of the Bar and Judiciary and carries the highest rating established by the Martindale-Hubbel Directory. This AV rating is based upon Mr. James’s reputation of high ethics and preeminent legal ability. Mr. James is also listed in the Bar Registry of Preeminent Lawyers,Best Lawyers In America, Oklahoma Super Lawyers and in the Outstanding Lawyers of America.